It’s no secret that one of the main reasons people visit Birmingham’s beautiful Jewellery Quarter is to purchase a special ring or piece of jewellery.

But there’s far more to it than that; Birmingham’s internationally-renowned centre of jewellery manufacturing offers surprises aplenty and a whole host of ways to make use of one’s time.

This is great news, because, chances are, once you’ve finished shopping for that special gift or proposal of marriage, you’ll have some free time on your hands.

We’d like to help you use that time most effectively, which is why we’ve decided to use this blog post to list the best things to do in the Jewellery Quarter once you’ve found your ring.

But first, a quick history lesson…

How did the Jewellery Quarter arise?

The Jewellery Quarter has been around for a long time - roughly two-hundred and fifty years, to be exact.

Over that time, it has evolved from a humble section of Birmingham in which a passion for manufacturing beautiful jewellery began to emerge into what is now Europe’s largest concentration of businesses involved in the trade.

The area sat at the heart of the industrial revolution and was in no small part jointly responsible for helping Birmingham become known as the ‘city of a thousand trades’.

These days, it remains the place to browse and buy the most extensive range of rings and other jewellery in the UK and is home to a vibrant population of millennials, ambitious businesses and unique places to eat and drink.

Things to do in the Jewellery Quarter

So, you’ve found your ring or special piece of Jewellery - what next?

What follows is our absolute favourite Jewellery Quarter hotspots that will offer the perfect tonic after a heavy bout of shopping.

This is the last remaining Georgian Square in Birmingham and hails from the 18th century. 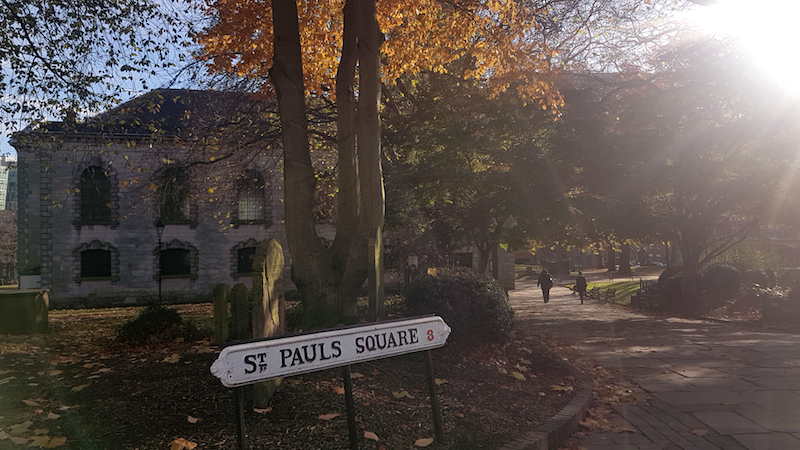 Named after the attractive church in its centre, this is a beautiful place to meet, chill out or simply take a wander when you need to stretch your legs after all that shopping.

The church (aptly named St Paul’s Church) is a Grade I listed building and dates all the way back to the 1770s. Featuring gorgeous stained glass windows and an instantly recognisably square, it’s the perfect place to reconvene if your shopping party decides to head in different directions.

It’s also surrounded by fantastic places to eat and drink.

More recently, a number of apartment schemes have been built in the area, making for a vibrant local culture and what is nearly always a busy yet peaceful place in an otherwise bustling city.

Dating all the way back to 1848, the Warstone Lane Cemetery was designed to be a burial ground for members the Anglican Church. 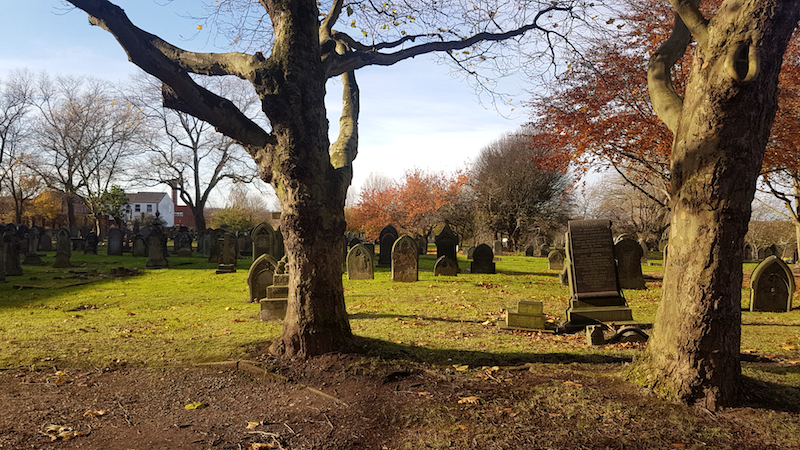 As a result, it features fantastically preserved catacombs and makes for a really interesting, cultured visit while you’re in the Jewellery Quarter.

Although, on the face of it, this might not sound like the most exciting day out, the Jewellery Quarter’s Pen Museum is a fascinating place to visit if you’ve got some time to spare. 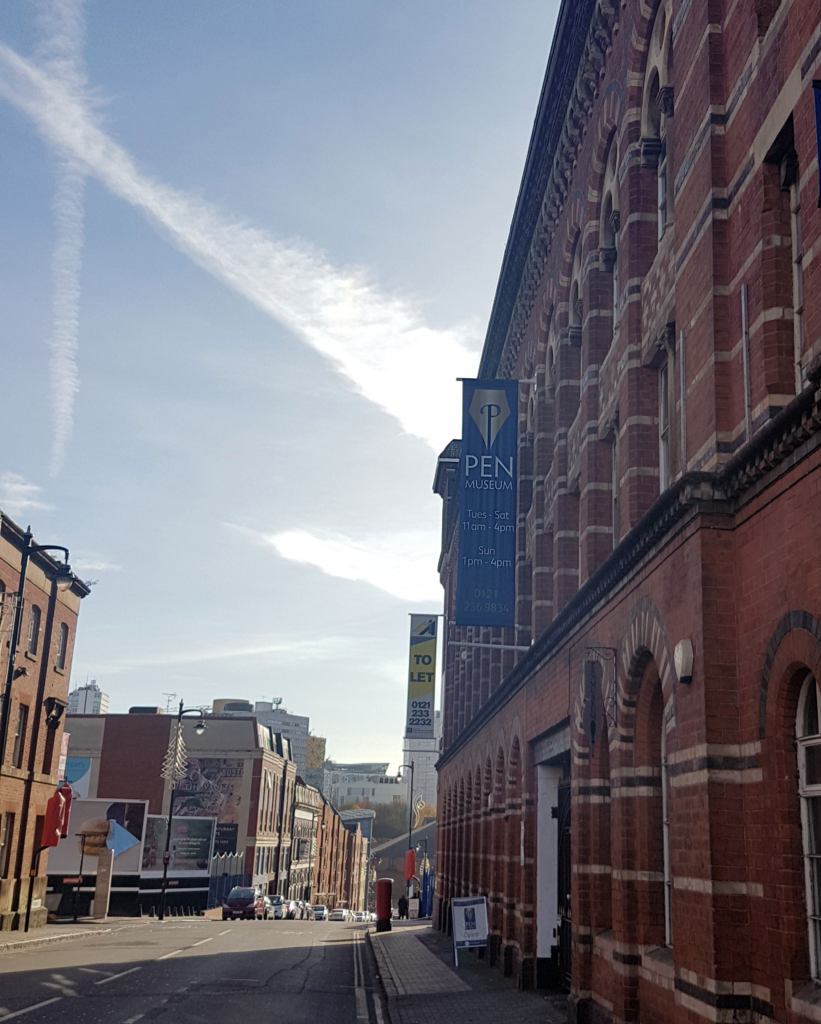 This is the only museum in the country dedicated to the history of pen making and details exactly how Birmingham became the centre of the world’s pen trade.

Volunteer guides (the museum is run be a registered charity) will show you around the Grade II listed building that was originally opened in 2001. Those wishing to get a bit more ‘hands on’, will enjoy the live demonstrations and ability to try out all manner of different styles of pens (and not to mention typewriters and Braille machines).

You’ll be surprised by how fascinating and captivating a history lies behind pens!

One of the Jewellery Quarter’s most famous and instantly recognisable landmarks sits conveniently in the middle of a busy roundabout (should you get lost and need to relocate yourself!). 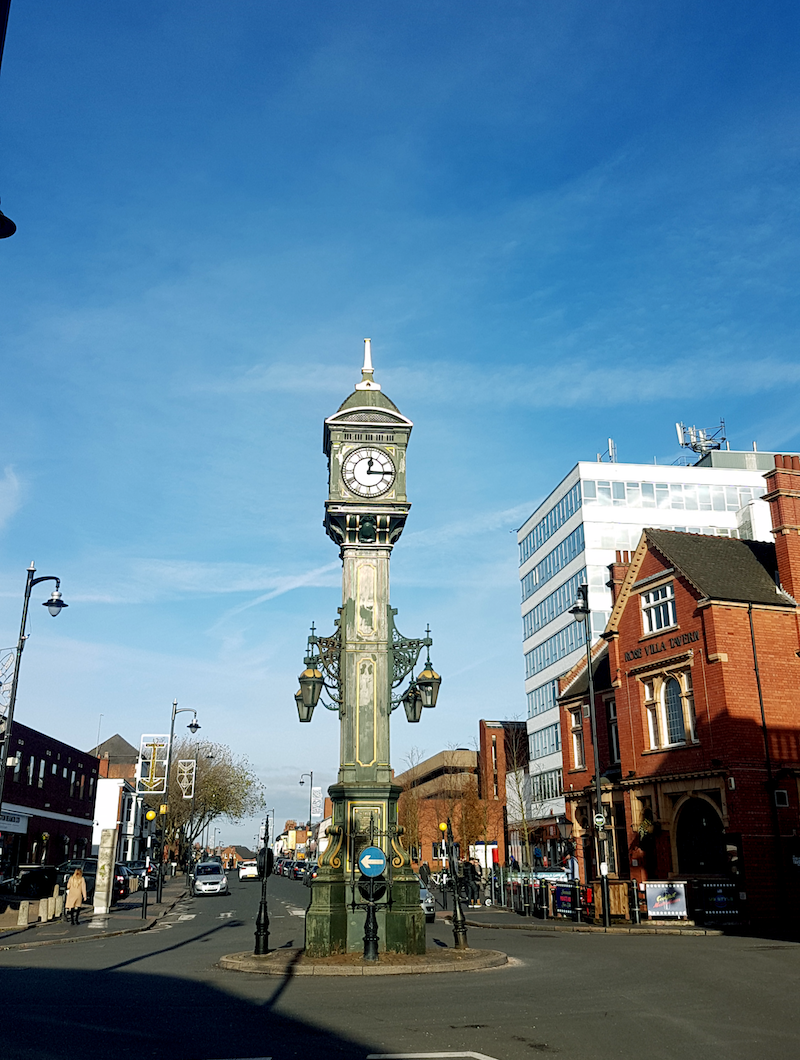 The Chamberlain Clock is situated at the junction of Frederick Street and Vyse Street and dates back to 1903.

This Edwardian clock tower is made from cast-iron, and while it might not represent anything more than a photo opportunity and something to say “yes, I’ve seen that!”, it’s absolutely something you need to take time out to see if you’re in the area.

Situated in the former Newman Brothers’ factory, The Coffin Works is a trip back in time to 1960s Britain.

Found in Fleet Street, it takes visitors on a journey of sights, sounds and even smells of the 60s. Some awesome hands-on action can also be found for younger visitors.

The Coffin Works was once hailed as the place in which the world’s finest coffin furniture was built, and even undertook fittings for the funerals of Chamberlain, The Queen Mother and Winston Churchill.

It’s open Wednesday to Sunday, therefore if you happen to be ring shopping on one of those days and fancy a break - literally - in another world, it’s well worth a visit.

And finally: The Museum of the Jewellery Quarter

The last entry on our list is the famed museum of the Jewellery Quarter, which can be found on Vyse Street. 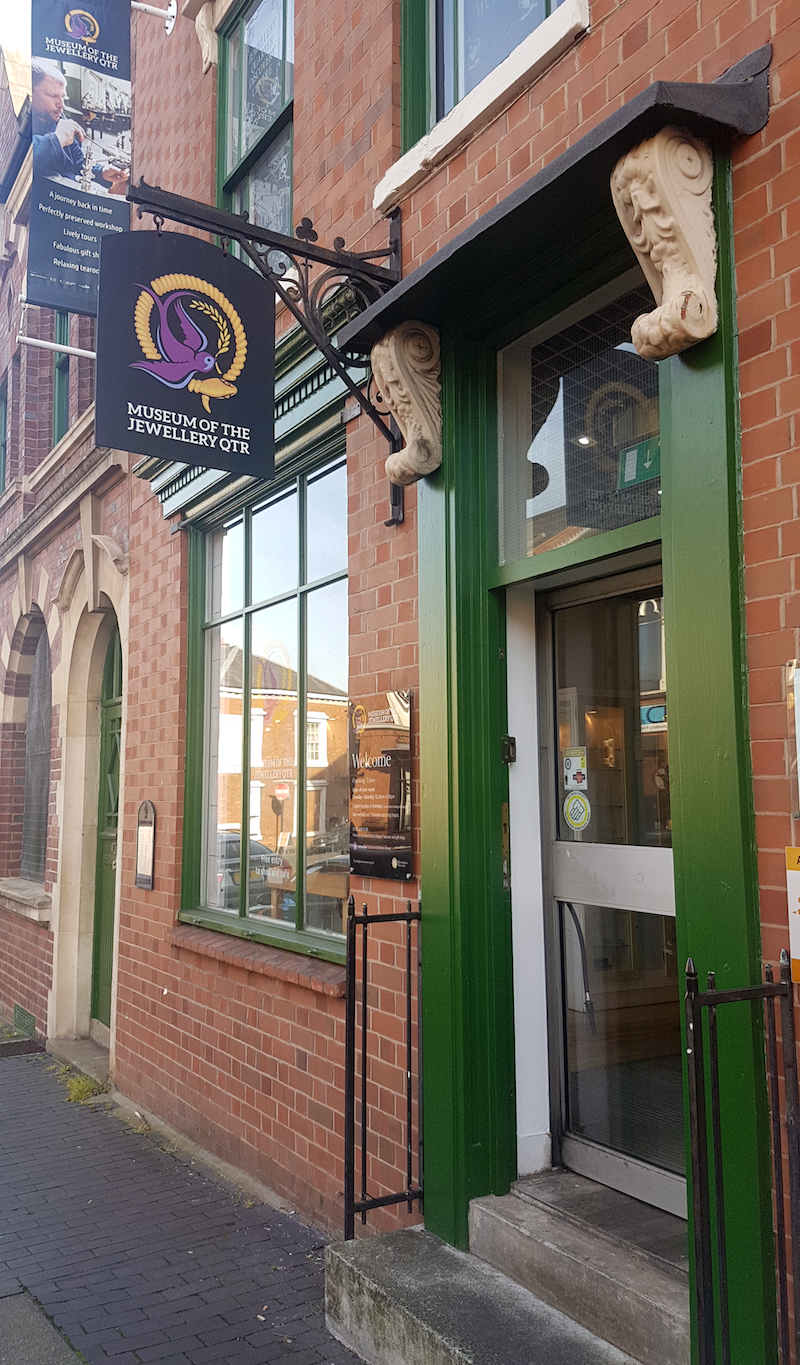 Built around the preserved Smith and Pepper jewellery factory (which closed in 1981), this museum gives visitors a glimpse at how jewellery workers of a bygone era used to go about their craft.

A tour of the entire factory is on offer (at specific times), and you can also watch live demonstrations and visit a gallery that beautifully details the history of jewellery craft.

Tickets are relatively affordable, which makes this particular break from shopping a no-brainer. After all, what better way to cap off a day shopping for the most important jewellery of all than by finding out more about the heritage behind it?

We hope you enjoyed our list of things to do in the Jewellery Quarter once the shopping has finished. Keep it in your back pocket for whenever you go and make the most of this wonderful corner for Birmingham.

Birmingham’s Jewellery Quarter remains one of the most popular destinations for visitors to the city. Now just a quick tram ride from New Street station, it combines the unavoidable allure of chic restaurants, bars and boutique shops with traditional jewellery manufacturers, whose industrial era buildings set a history-drenched backdrop to any shopping trip.

The Jewellery Quarter continues to develop considerably, with new businesses regularly setting up shop and innovative restaurants, shops and bars providing near limitless options for visitors.

In fact, there’s so much going on, that we thought we’d start a new monthly blog series where we take a look at the latest news and developments from the Jewellery Quarter.

Post offices usually only make the headlines when they close down after many years of operation, therefore it’s encouraging to see one of Birmingham’s finest receive a major refurbishment. 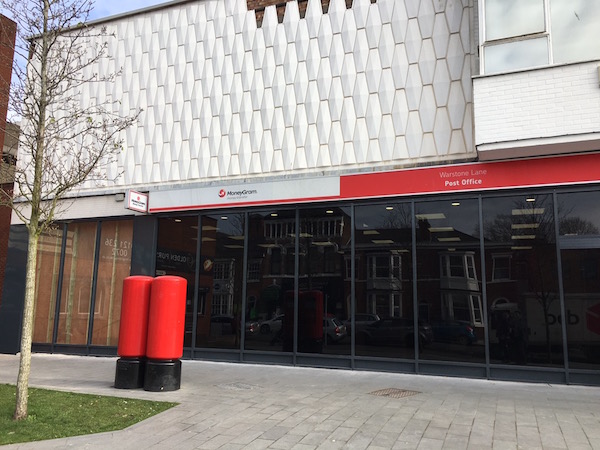 Based on Warstone Lane, one of the Jewellery Quarter’s oldest post offices began its transformation in early January and recently re-opened to the public. They’ve done a rather splendid job, too, as can be seen in the photo.

On Friday, 3th March, the annual Big Yellow Friday event will be held within the Jewellery Quarter, with organisers Children’s Liver Disease Foundation (CLDF) determined to add a whopping £90,000 to the £664,000 that has been raised to date.

Based in Birmingham city centre, CLDF is the sole UK charity dedicated to fighting all forms of childhood liver disease. With over one-hundred different liver diseases in existence that can effect toddlers, babies and young people, CLDF fights hard to reduce cases in the UK by providing emotional support for families, vital information and fund raising events like Big Yellow Friday.

This year’s event is a great day out for the whole family, and looks set to be another brilliant day of fund raising. For full details, visit http://www.bigyellowfriday.org.

Often known as ‘home of the balti’, Birmingham certainly isn’t short of an Indian restaurant or two.

The latest entrant sits in the heart of the Jewellery Quarter and occupies what was once the Brewsmiths Cafe. Situated beneath the railway arches at Snowhill, the Indian Brewery has retained much of the former tenant’s hipster feel and takes the innovative approach of combining traditional ales with classic Indian cuisine.

The result is certainly unique and the setting about as modern as it comes. Find out more here.

Young home hunters urged to check out the Jewellery Quarter

The Birmingham Mail recently conducted a survey that asked the perennial question: as a young couple, where should you look to live in Birmingham?

Having canvassed opinion among countless estate agents, the Mail found that the Jewellery Quarter ranked among the most popular areas for young couples seeking a new home.

This is perhaps no surprise in an area known as one of the UK’s premier hipster hotspots (see below) and which benefits from countless bars, restaurants and a short tram ride to the city centre. The rich history and picturesque architecture has no doubt played a big part in the area’s popularity among the younger generation, too.

Jewellery Quarter crowned one of the UK’s top ‘hipster hotspots’

Despite the growing popularity of the Jewellery Quarter for young home owners, the influx of hipsters appears to have pushed both trend levels and house prices sky high, according to new research.

The study was carried out by property website Zoopla, which describe areas like the Jewellery Quarter as becoming gradually ‘gentrified’. Unsurprisingly, London tops the bill in the list of hipster-inspired locations, but the Quarter appears to be hot on its heels.

Despite the reported rise in house prices as the result of gentrification, the area is also likely to benefit from increased bar and restaurant trade and the revival of old buildings that may otherwise have lay dormant and unloved.

So, hipster or not, the Jewellery Quarter is clearly one of the places to visit if you want to experience modern culture at its most vibrant, inclusive and welcoming.

February has certainly been a busy month in the Jewellery Quarter. 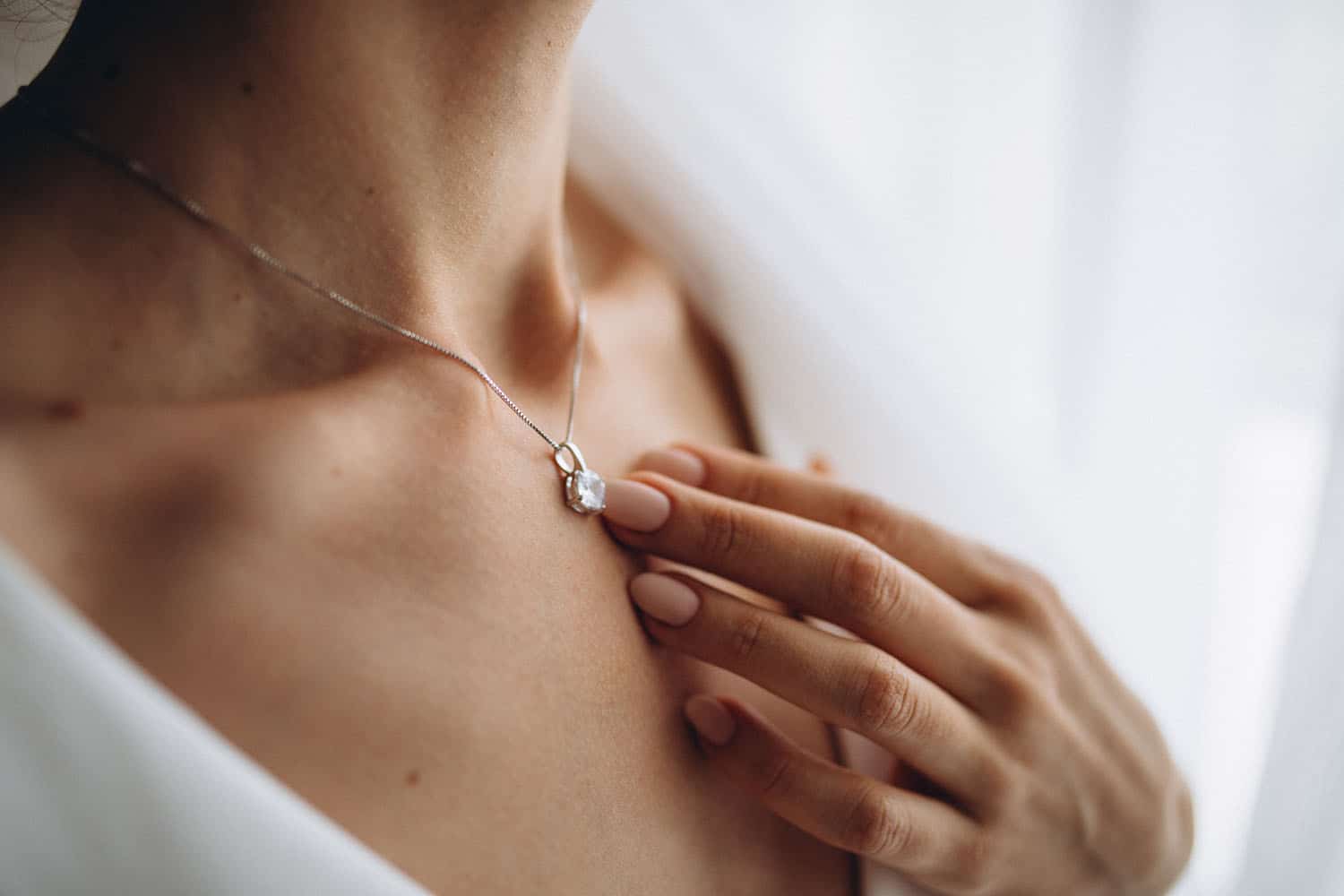